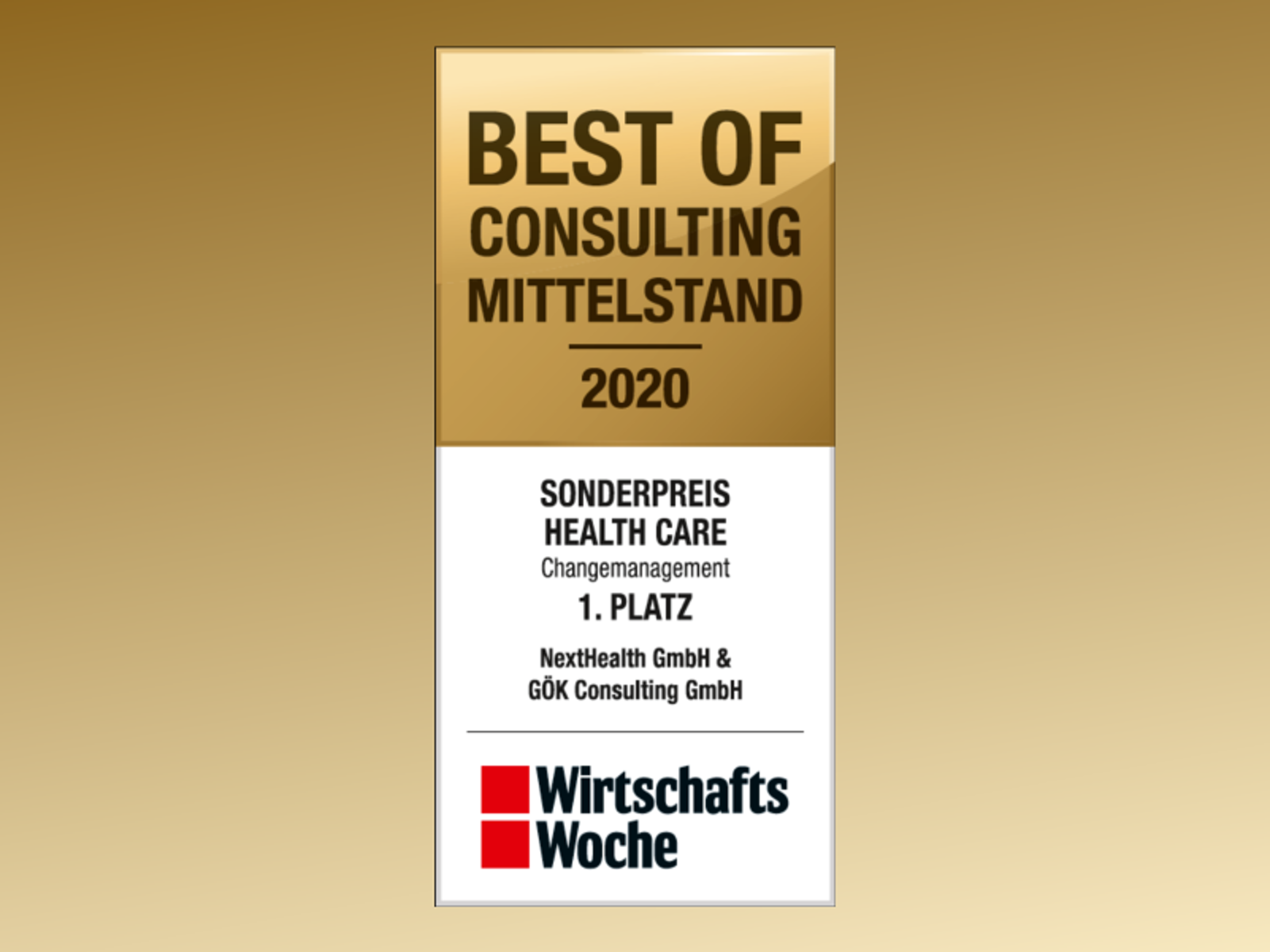 GÖK was able to win the current competition of the  Wirtschaftswoche – Best of Consulting – and is thus one of the few companies among medium-sized consulting companies that have been recognized as outstanding consultants by all leading business magazines. We are proud of this and would like to thank our clients for their trust in our performance during the 30 years of GÖK Consulting’s existence.

The prize was awarded for a project that GÖK carried out together with its sister company NextHealth at the Cologne Hospital (Klinikum der Stadt Köln.)

“We are very proud of this award, especially since the complementary consulting of GÖK Consulting with its sister company NextHealth was evaluated so successfully. The employees of the clinics had been unsettled by the tense financial situation and the necessary restructuring course adopted by the new management,” report Ulrich Pieper and Dr. Stefan Drauschke, Managing Directors of GÖK Consulting. In the years before, changing strategies of the former management had rather fueled the situation instead of improving it.

“In addition to the strategically necessary changes which were developed by the management of Cologne Hospital together with GÖK Consulting, it was necessary to convince the employees for the plan. Individual professional groups had withdrawn and cooperated less with their colleagues from other areas,” emphasize the two GÖK specialists. “Therefore, it was important for them and their team not only to understand the strategy, but to actively help develop it. This created trust in the management’s course and we were able to re-establish more togetherness across the professional groups.” Among other things, GÖK Consulting was also involved in evaluating and preparing figures, data and facts in a way that was comprehensible to everyone. Together, “Klinikum and GÖK/NextHealth” understood how to implement a jointly developed strategy in fields of action and projects.

For participation to be lived, the entire “system” of the workforce had to be involved, for which the consultants applied their onion-like “four-layer model”: The outer layer, the so-called K4 (K=circle), consists of a representative cross-section of all employees in the company. K3 is made up of executives from all professional groups at levels 1-3, while the innermost K1 represents the decisive steering circle with TOP executives. The members of K2 are the actual cross-professional project group that works on content and formulation. The GÖK/NextHealth team organized workshops and conferences for the top-down-bottom-up process with a total of more than 500 participants, in which the company’s employees were able to contribute their ideas for goals and measures for the future of the clinics. The results were then prepared by the consultants, presented to the management and discussed and decided upon there. “In this way, even employees who do not hold a management position were able to contribute their suggestions for improvement,” says Pia Drauschke (NextHealth).

The seven-month work has improved cooperation, says Baumann, the clinic’s managing director. He says, “That’s the most important basis for us to continue at all and also to remedy the financial imbalance.”